Noctilucent clouds over the Isle of Lewis by Emma Rennie

Longer days and brighter nights mean less time under the stars, especially if (like me) you live in the far north of Scotland, when astronomical twilight vanishes completely from around late May.

One advantage to this, however, is increased opportunities to observe some of the highest cloud formations on Earth, so called Noctilucent clouds – or ‘night shining’ clouds.

These beautiful, wispy and wave like clouds sit around 50 miles overhead in a region of our atmosphere known as the mesosphere.  The clouds themselves are composed of fine ice crystals and atmospheric dust, and can even be seeded from the disintegration of small meteors which burn up around the same altitude – called ‘meteor smoke’.

Specific conditions are required to see these clouds, and the further north you live generally the better (roughly between latitudes 50 – 70 degrees).

The Sun must be below the horizon in such a way that its rays light up the clouds from below.  Broadly speaking this can happen during a period known as nautical and astronomical twilight – when the Sun sits between 6 and 18 degrees below the horizon.  This means noctilucent clouds are normally only visible from mid-May to mid August from the British Isles.

These clouds are normally only visible when the Sun sits within the nautical and astronomical twilight bands, between 6 to 18 degrees below the horizon.

Times vary depending on your latitude but here are the earliest times for nautical twilight at various locations.  These times therefore represent the earliest you’re likely to be able to observe the clouds, although optimal times will likely be between 30 – 60 minutes after these times:

You might think these times suggest living further south affords you longer opportunities to observe them.  This isn’t true as the further south you live the more likely you are to experience periods of actual darkness later on, when the Sun dips below 18 degrees – too low to illuminate the cloud base. 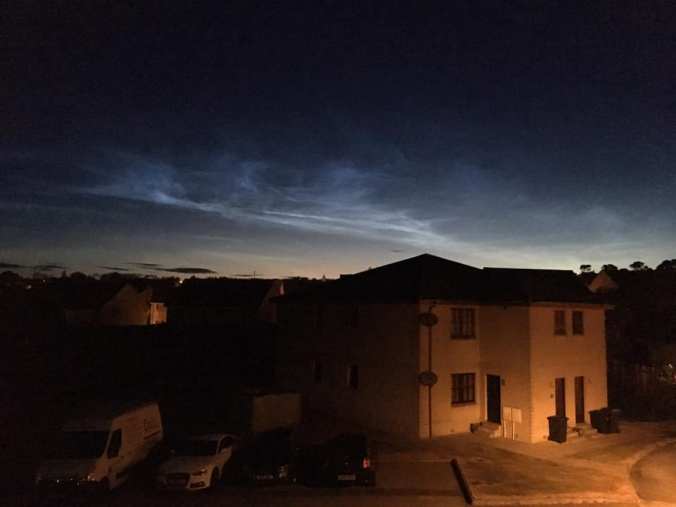 Captured by Gav Ross from Aberdeenshire

A few weeks either side of the summer solstice is the best time to observe ‘noctilucent’ or ‘night shining’ clouds.

These wispy collections of ice crystals are the highest clouds on Earth, located in the mesosphere up to 50 miles overhead. They’re too faint to be seen in daylight and best observed when the Sun is between -6 and -12 degrees below the horizon.

At the moment at Highland latitudes this gives you an approximate window between 11.30pm and 3am in the morning.