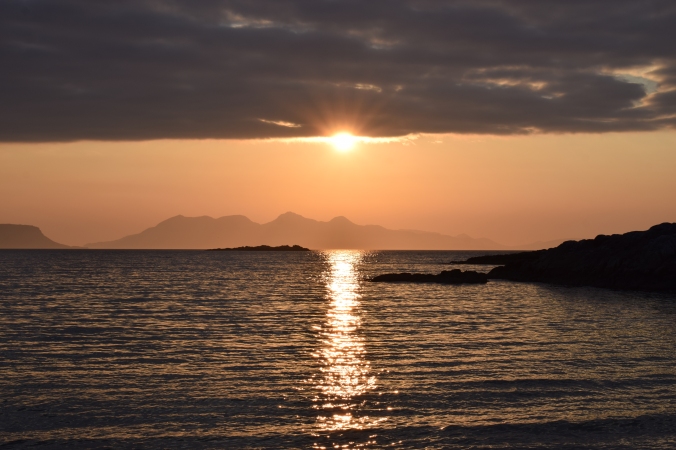 A stunning sunset captured over the Isle of Rum

In the north of Scotland we’re about four days away from losing all astronomical twilight and entering a period of sustained ‘nautical twilight’.

During this time the centre of the Sun’s disk never dips more than 12 degrees below the horizon, rendering our clear night skies a dark azure blue, with only the Moon, planets and brightest stars visible after midnight.

This will continue until mid July when astronomical twilight finally reappears.

You might notice the nights seem to be pulling in quickly at the moment. This isn’t your imagination. We’re in a period of greater daylight change as we approach the Autumn equinox on September 22nd.

At the moment the Sun is setting around 20 mins earlier each week. Compare that to July when Sunset times were only changing by around 5 mins per week, and almost no noticable change over the summer solstice on June 21st.

Of course this is great news for stargazers, with astronomical twilight now kicking in around 9.50pm meaning your late night forays under clear skies will reveal increasing numbers of stars and fainter nebulae.

For seekers of dark skies this month’s new moon is September 9th so binoculars, cameras and telescopes at the ready.