I was delighted to be approached by Caroline Snow, who manages the local Merkinch Nature Reserve, to host an astronomy evening in March.  Our mutual friend Russel Deacon introduced us via Facebook and after some informal chat we agreed enough of an initial proposal for Caroline to begin promoting the event on social media and some local papers.

From a dark sky perspective the area isn’t perfect as there’s a fair bit of light pollution facing south and east back towards Inverness.  But it’s a beautiful location overall with lovely clear views north and west and perfectly acceptable dark skies in those directions.  It was also a good compromise between darkness and accessibility for the people we hoped to attract from the local area and beyond.

We initially planned the tour for Friday 24th of March but the weather was a bit patchy and looking better the following day.  So after some further discussion Caroline and I decided to go for for the clearest night possible, and delayed the event until Saturday.

The next day was sunny and clear as forecast and when twilight fell I headed over to the reserve to setup an hour or so early.  This was the lovely scene as the sun set over the observing site. 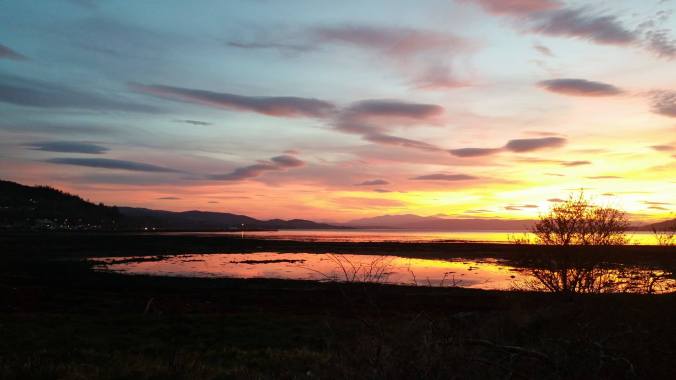 My first challenge arose when unloading the telescope beside the picnic benches at our chosen spot. I realised I had some company next to me in the form of a few local teenagers who were blaring out Johnny Cash and Elvis from a brightly flashing ghetto blaster!  I approached them to say hello and explain what I was doing here, and in return was offered a swig from a Buckfast bottle!  After declining and explaining I had my van with me, one of the party lurched towards me and gave me a giant bear hug, which was a lovely welcoming gesture but threatened to unbalance me and the large bag of astronomical equipment I was carrying!  Dusting myself down, I thanked them and invited them to join the tour when it got underway.  I then continued with my astronomical setup, calmed by the soothing melodies of ‘Love Me Tender’ drifting through the darkness. 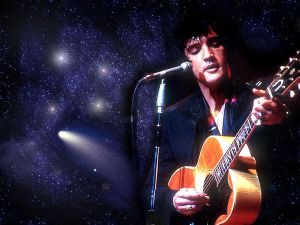 Elvis performing in front of a large comet.

The plan for the evening was a naked eye and binocular constellation tour, focusing on some interesting targets I’d prepared to discuss in advance.  The telescope would serve to give more detailed views of a few select objects we’d be looking at.  At this stage I was only expecting perhaps a dozen people to turn up but I severely underestimated Caroline’s promotional skills; over the course of the evening about 30-40 people appeared.  This was obviously fantastic but meant individual telescope time was going to be limited.

As the tour started the next challenge arose.  Both laser pointers we’d taken down with us failed, producing a pitiful beam only I could see.  An audience member came to the rescue and offered me his laser pointer, but incredibly that failed too!  The result was that only a few of the more experienced stargazers really knew what I was pointing at.  The only real way out of this pinch was to use the telescope to track to each object in turn and invite people over to the eyepiece.  This let everyone know the rough direction I was pointing at and afforded them a great view of each target.  Phew!

Eventually the pens warmed up and the party really kicked off when people started asking questions – really interesting ones.  What were supernova?  How large is the universe?  Why are stars different colours?  Where does the plane of the milky way sit?  The list was impressive and resulted to some great crowd chat and one to one conversations.  Some of the best questions came from the younger members of the audience, some of whom were so small they had to be lifted up to the eyepiece to see through the telescope (note to self:  bring a step next time).

In rough order our stellar tour took us through the following: 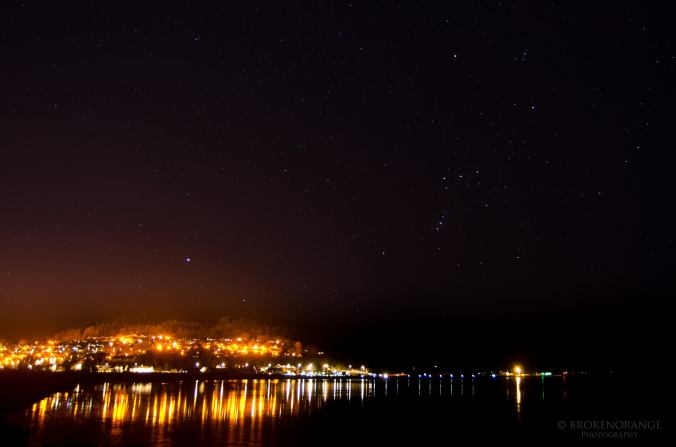 Simon Garrod took this nice image of Orion from our observing position at the Merkinch Nature Reserve.

Highlights?  The Orion nebulae and the M3 globular cluster were real crowd pleasers in the scope.  M3 looked great in the eyepiece despite being in the light polluted eastern sky, its densely speckled core in clear evidence. 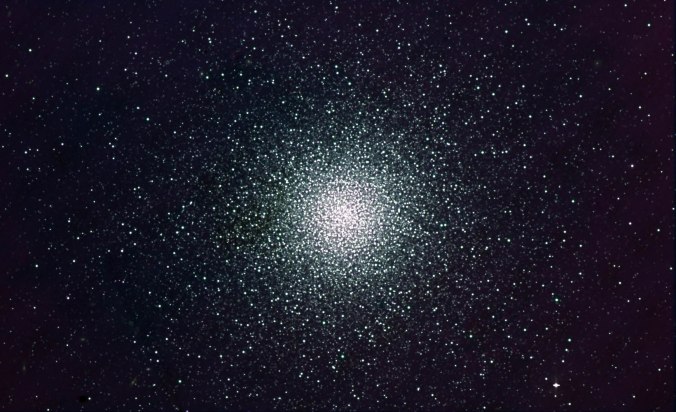 The M3 globular cluster is a fantastic target even with moderate light pollution.

After an hour or so people began to filter off home but the stragglers were rewarded with Jupiter just beginning to rise in the East.  Despite a view impinged by a tree the telescope did a great job of bringing Jupiter and its moons in for some closeup action.  There was general gratitude and thanks all round, leaving Caroline and myself thoroughly rewarded by a successful night.