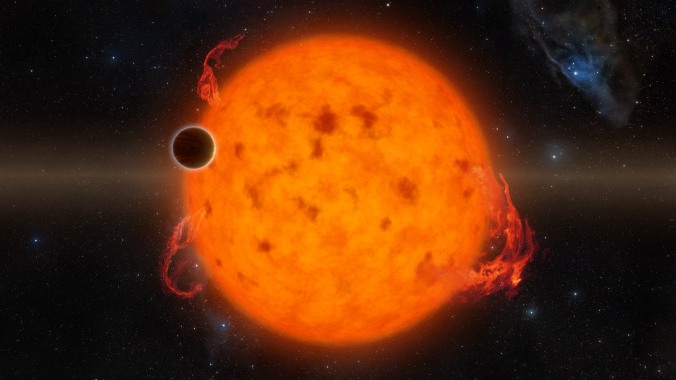 Artists impression of a giant exoplanet occulting part of its parent star.

Recent advances in telescope and sensor technology have finally allowed us to start answering one of the great unknowns of the 21st century – how many habitable worlds are there in our Milky Way galaxy?

Until recently it was simply assumed that a fairly high fraction of stars ‘probably’ contained planets, and that some further fraction of those would be in the so-called habitable zone.  These assumptions were based from simple extrapolation from our own solar system (along with some inconclusive inferential data gathered in the 1990s).  But as has been painfuly demonstrated with the hunt for life in our solar system, assumptions like this need careful confirmation, and extrapolating from a sample size of one is seldom convincing.  Often, what we want to believe is, regrettably, not compatible with reality.  The video link from the late Carl Sagan at the end of the piece will give you a flavour for what people ‘guessed’ in the 1980s.

The good news is we now have concrete evidence that an abundance of other planets are out there orbiting other suns – in fact roughly 70% of all stars are accompanied by other worlds.  How do we know this?  There are two simple detection methods which I’d like to explain in more detail, which both ‘indirectly’ detect the presence of other planets.  These are:

The first method involves closely observing a star over a period of time with a photometer, looking for any subtle changes in its brightness.  Any dip in brightness which is periodic and cannot be explained by general stellar dynamics is then assumed to be a large body passing between us and the star.

Incredibly, even amateurs with 12 inch backyard telescopes have been able to detect these illumination changes for very large planets, producing crude light curve plots that have later been verified by professional astronomers.

As the exoplanet passes in front of the host star the number of photons reaching the objective lens of the telescope drops in a characteristic way.

This method of detection works out to distances of several thousand light years, and allows an approximate calculation of the planet’s size, or radius.  Additionally, for certain nearby stars (if clear spectra can be obtained), drops in light from specific elements can be detected, telling us about the possible composition of the planet’s atmosphere.  For example, if the planet contained a Nitrogen rich atmosphere, we might detect a dip in the intensity of the spectrum corresponding to the wavelength of Nitrogen – this process is called ‘absorption spectrometry’.

The main disadvantage of the transit method is that it relies on a nearly perfect edge-on view of the planet-sun ecliptic from our earth bound position.   Otherwise we simply would not detect any occultation.  Thankfully, we can calculate roughly how often this orientation occurs and account for it statistically.  There’s no shortage of candidate stars out there with systems well aligned for detection.

The second method is similar, but instead focuses on the relative motion of the star.  Despite the huge difference in mass between a star and its satellites, as a planet orbits it will impart enough of a gravitational tug to make the star  rotate about a small local axis – tiny but detectable.  The larger the planet the bigger this wobble will be.

An exaggerated illustration of how a large star will rotate about a local axis due to the gravitational influence of a planet.

To detect this regular movement we can look at the light emanating from the star over time and try and detect if its spectra is being shifted by tiny amounts.  By the doppler effect, if the wavelengths of the star’s spectra appear shifted towards the red it must be moving away from us, and the opposite if the spectra is shifted towards the blue.  In this way the sun’s speed and local orbital radius can be calculated, and from that a determination made of the mass of the orbiting planet.

As a quick example, the Sun moves by about 13 m/s due to the influence of Jupiter, but only about 12 cm/s due to Earth.  Incredibly, velocity variations down to 1 m/s or even less can be detected with modern spectrometers, such as the HARPS.  The major limitation of this method is distance.  At the moment it’s generally only useful for star systems up to 200 light years away.

Bringing both methods together, however, lets us form a picture of an exoplanet’s size and mass, and therefore it’s overall density.  From that,  inferences can even be made about the internal structure of the planet.  All this information without even observing the planet!

So what do these methods tell us, so far, about the likely number of habitable or earth like planets in our Milky Way galaxy?  The answer is absolutely staggering.

Based on Kepler mission data, as many as 40 billion earth like planets in the habitable zone could be orbiting around red dwarf and sun-like stars.   Taking away the red dwarfs leaves an upper calculation of 11 billion around Sun like stars.  Just think about those numbers for a moment.

That’s as many as one earth-like planet in the habitable zone for every 10 stars in our local galaxy!  A stupendously high number of candidate worlds from which life may have originated.

But here again, we must be cautious.  11 billion is 11×10^9.  But what if the probability of life forming on rocky planets within the habitable zone was actually as low as low as 11 x 10^-9,  or even 11 x 10^-99?  Then there might only be one or no candidate planets containing life.  A depressing possibility, but one we should never allow our natural bias to discount.  The lesson here is that any large number can quickly be diminished in stature by an equally small probability.

At the moment we simply don’t know what this probability of emergent life is.  Some biologists are more optimistic and consider it relatively high for simple single cell life, but other figures, for more complex multi cellular organisms, are much more pessimistic.  But when we do know this figure, calculating the number of planets on which life has arisen will be comparatively simple, and Frank Drake’s famous equation for estimating the number of ‘technical civilisations’ will be one step closer to a final solution.

How did we view the question of ‘other planets’ in the context of life outside Earth in the 1980s.  Watch the late Carl Sagan to find out.