We’re finally emerging into some periods of significant darkness in the north of Scotland. Tonight marks approximately 1.5 hours of true astronomical darkness at latitudes 57 degrees north.

Astronomical darkness is defined as the sun being more than 18 degrees below the horizon, which it will tonight between 12.30am and 2.13am. Notwithstanding the waning crescent moon rising after midnight, conditions should be pretty good for general observing. Local weather reports indicate clear skies from about 7pm too. 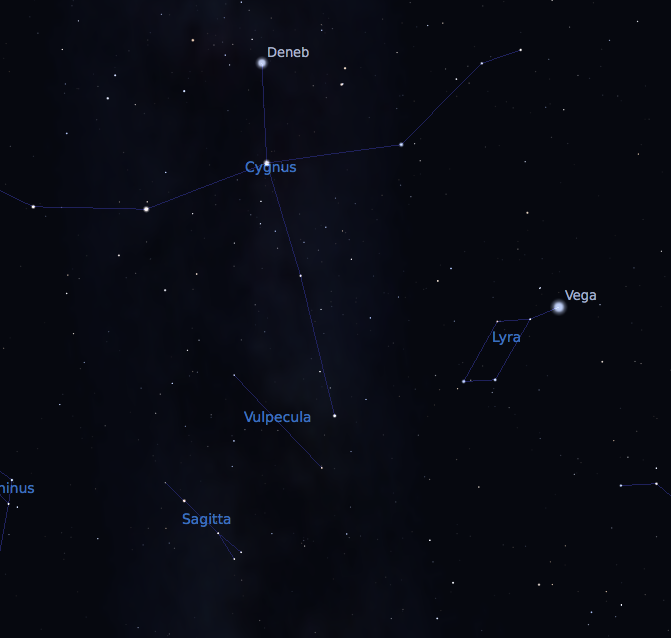 Vega sits above the little diamond of starts in Lyra

After midnight look south west and directly up, almost towards the zenith. The bright blue-white gem you might see shining above will be Vega – the 5th brightest star in northern skies. Vega sits above a lovely little diamond shaped constellation comprised of four moderately bright stars (within the constellation Lyra).

Vega has been studied comprehensively by astronomers and has some unusual properties. One is its incredibly rapid rotation which causes its mid drifts to bulge out fantastically, yielding very large equitorial radius measurements. If Vega rotated only another 7% faster its would rip itself apart due to incredible centrifugal forces.

Vega is also big and young as far as stars go – with a mass of 2.3 Suns and 37 times more bright. Because of its size and energy Vega won’t survive as long as our Sun and will remain in a stable state for only a fraction as long as our home star (perhaps 500 million years).