One of the best applications of a good telescope is the viewing of a wide range of double stars. While there are many double stars that can be split in a pair of binoculars, some of the most beautiful examples require more magnification, and that’s where telescopes excel with their narrower fields and greater resolving power.

One of the best double stars to view at northern latitudes lies in the head of the constellation Cygnus the swan – Albireo.

This beautiful indigo and gold double star really dazzles in a telescope eyepiece, and is easily resolved in a small telescope with at least 30x magnification.

The contrast between amber Albireo A and sapphire Albireo B is readily apparent in the above striking image, taken by my friend and astro-photographer Minos Kritikos.

There is still some speculation surrounding whether or not the Albireo pair are gravitationally bound – most evidence suggests they are. If so, their orbital period would be around 75,000 years. 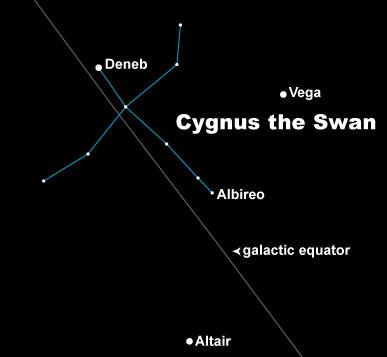 There are many interesting double stars you can try observing with even a modestly sized telescope – remember that most stars we can see in our galaxy (over 60%) are either double or multiple star systems.  Here’s a list of some other visually pleasing doubles to look out for.