I had the great pleasure of helping the 2nd Balloch Brownies gain their Stargazers badge this evening.  Brownie leader Gaener Rodger wanted an astronomer to lead the girls through basic constellations and star navigating, but I came prepared for both outdoor and indoor activities in the event of poor skies.

A captive and very excitable audience!

The location for stargazing was next to the Balloch hall (beside Balloch Primary) which has some fairly bright street lights nearby.  Thankfully the skies were clear enough to make out the main constellations once we’d shifted our location to the gable end of the hall, away from the worse offending lights. 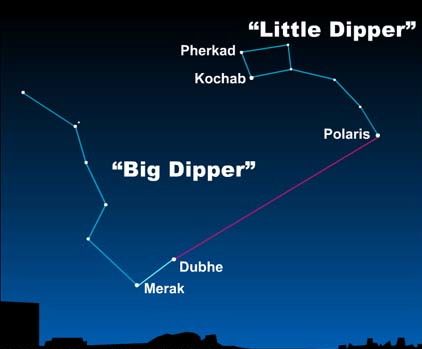 The plough or dipper is one of the best asterisms to orientate an audience and begin a stargazing tour with.  Ursa Major is also home to dozens of interesting stars and deep sky objects.

The stargazing tour lasted about 30 mins and covered the following:

Although it was quite a large group (around 20 brownies), I was amazed at the number of really interesting questions the girls kept throwing at me – what’s a light year,  what causes a supernova, how many stars are there?  The science behind the stars seems to really engage the minds and imaginations of children.

After stargazing we headed back inside for some of the indoor activities I’d prepared.  These included:

Laying down the lunar soil

The latter experiment was messy but well worth the effort, and was a good opportunity to discuss planetary evolution – why the moon and inner planets have such clear cratering and what it tells us about their age and history.

All in all it was a great evening and more importantly the Brownies seemed to have a fantastic time.