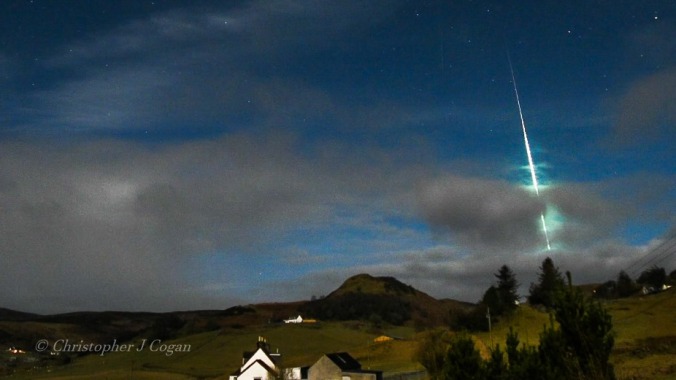 Many thanks to Chris Cogan, a frequent contributor to my Facebook site, for sharing this spectacular Geminid fireball he caught up in Muie, Sutherland in the Scottish Highlands late on Saturday evening.

The facebook post created some interesting discussion, with several people claiming to have seen the same fireball as Chris.  This is very likely.  Last year when I kicked off the 2018 Star Stories programe we witnessed a similarly bright fireball flaring overhead.  By amazing coincidence Chris also photographed this one around 70 miles north of our position.  You can read about that encounter here.

This year’s Geminids appear to have been very active and despite an almost full Moon reports came in from people claiming to have sighted dozens over a reasonably short interval.  My wife I can testify to this after witnessing three in very quick succession after only 5 minutes viewing under light polluted skies.

The next meteor shower to look out for is the Quadrantids, peaking between the 3rd and 4th January 2020.